Pandemic is an immersive co-operative game, where you work together as the World Health Organisation (WHO) disease control team to stop deadly diseases from spreading across the globe and destroying humankind.

Pandemic was the first tabletop game that I ever bought – my ‘gateway game’ that opened my eyes to the incredible world of board gaming – so I’ll always have a soft spot for it. When researching what to get for my first board game I knew I wanted something with an exciting, immersive theme that was co-operative and without player elimination (so everybody is in it ‘til the end!). Pandemic ticked all the boxes and it’s still a regular on our table years on. If you’re new to the tabletop gaming scene, or looking to introduce new people to the hobby, Pandemic is a great game to start with.

How do you play?

To win Pandemic you and your fellow players work together to cure 4 diseases that are spreading through different parts of the world. Red, blue, black and yellow cubes represent the diseases, which are placed in cities that match their colour.

To cure each disease, a player must collect 5 city cards from the same region (colour) and race to a Research Station to ‘discover the cure’. I like to imagine when collecting city cards, you are actually finding evidence and collecting samples, before heading to a research station to make scientific breakthroughs that help discover the cure

As part of the game setup, players choose their character by randomly picking from 1 of the 7 role cards: 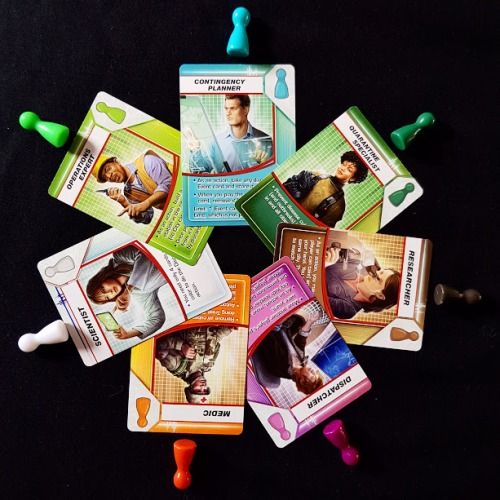 The different thematic characters are a great way to immerse players into the game and make everyone feel they have a part to play, particularly as each role has its own special ability. The Medic can use a single action to remove (‘treat’) all the disease cubes in an infected city, whereas other players would have to use an action for each cube. The Scientist only needs 4 city cards to cure a disease, instead of the usual 5 city cards. The different character roles aren’t completely balanced, and you can have a much easier or much harder game depending on the roles in play. If your team doesn’t have at least one of the more effective roles (Medic, Scientist, and Quarantine specialist), it’s an up-hill struggle to win the game. In my experience a couple of the roles are genuinely less fun to play, and I’ve seen players disengage because their role does not have as much active involvement in the game.

All players start together at a research station in Atlanta.

A player’s turn is split into 3 parts:

Actions can include any of the following: 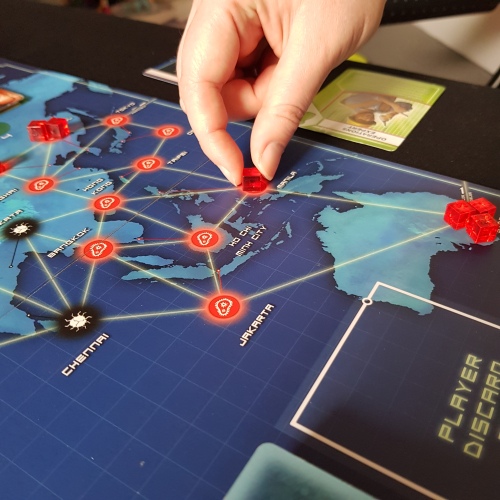 2) Draw 2 cards from the player deck. 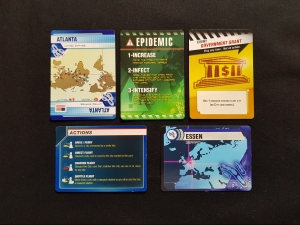 Play continues following these 3 steps until all 4 diseases are cured and you win the game. Note: you don’t need to eradicate the diseases (i.e. remove all the cubes from the map), you just need to cure them.

However, your team fail and lose the game if any of the following happen:

How complex is it?

With Pandemic, you don’t lose because the game is overly complex with infinite game choices; there are no big bosses to defeat and no hidden puzzles to solve. It’s actually a fairly straightforward premise and any complexity comes from how you work, strategise and prioritise together as a team. You have to find the balance between using the city cards to move to locations and to prevent outbreaks or giving it to another player so they can cure that yellow disease ASAP.

As I mentioned earlier, you only have to cure the diseases, not eliminate them. We made that mistake during our first playthroughs and tried to remove ALL the disease cubes from the board rather than cure the diseases – this made for some very difficult first games.

The game may not be very complex, but it can be difficult, so don’t expect it to be a walk in the park!

Do you need to be good at strategy to win?

Pandemic is all about the strategy. But you shouldn’t let that put you off. It isn’t about you being a master strategiser, it’s about the whole group thinking through the various courses of action and potential consequences, prioritising and facing the obstacles that the game throws at you. However, at the end of the day, how you decide to proceed during your turn is your choice.

How many other players do I need to have a good game?

When you vary the number of players in Pandemic the game play changes significantly. There are some advantages to playing with two players instead of four: it can be simpler to decide on strategy and how to use actions with less people weighing in and player turns come around quicker, making it easier to carry out any planned moves without something unexpected happening in the meantime, as there are fewer infection cards drawn between a players consecutive turns.

In contrast, in a four-player game there are more roles and therefore more special abilities to work with. It’s more likely that someone will pick one of the more effective role cards, which definitely helps with curing diseases. More players also mean you can cover more map area to prevent outbreaks. It can also be more fun when there are more people sounding out what to do.

I love that when you vary the number of players in Pandemic, it adds variety to the game play, with different challenges. Pandemic is a game that is great at all player counts.

What do you think of the game components?

The physical components are all of good quality: the box, the board, the cards, the translucent coloured disease cubes and the markers not only look great but have stood the test of time (3 years and counting). We’ve played Pandemic many times and the components have proven to be long lasting and hardwearing. The illustrations, graphics and terminology are very thematic and help get you into the ‘medical disaster’ mindset. The map on the board, with its interconnecting cities and diseases spreading throughout the world is a great design element.

That being said, I do find it irritating that 3 of the player pawns are different shades of green (lime green, dark green, and a greeny-blue). I don’t dislike green…in fact, it’s my favourite colour and I always play green…ALWAYS! However, having 3 similar colours causes confusion and in my experience players often accidentally move the wrong pawn. We encounter the same problem when the two dark pawns are in play (dark green and dark brown). It would be understandable if there were so many pawns that they needed to repeat colours, but there are only 7! There’s no reason for this, and this decision by the designers has caused the game to have accessibility issues. We regularly play board games with a family member who has colour-blindness, and can have difficulty differentiating between these player pawns. It feels like this is more than just a lack of attention to detail.

When would you play this game?

Nowadays, I play Pandemic when I want to introduce new people to modern board gaming, and it has proven itself to be a brilliant gateway game many times over. I think part of this is due to the popular ‘medical disaster’ trope it uses, which most people have come across before through TV or film. It also works as a gateway game because it uses co-operation, a mechanic that isn’t normally seen in more ‘traditional’ games like Monopoly and Cluedo. Also, with no direct conflict and no player elimination, being new to Pandemic does not put players at a disadvantage and the rules can be explained as the game is played. But most of all Pandemic is great gateway game because it’s an all-rounder that gives a good overview of what of modern tabletop gaming has to offer: set collection, cooperation, player movement, strategy, and balancing the controlling the spread of infection and finding cures. And when players are faced with all of this… they catch the board game bug!

The tension that grows as you play the game is incredible, and we’ve played multiple times where winning the game has come down to surviving a final card from the infection deck! I had never realised how exciting board games could be until I played Pandemic.

How replayable do you think the games is?

The aim of the game in Pandemic is the same every time you play: Cure all the diseases! In that respect, each game is the same…but the different roles in play make each game different. The way you approach a game depends on which characters are part of your team. I love this aspect because you have to figure out how to use each character to make the most out of their special ability.

As well as the character roles, the game changes depending on the player personalities which also add to the replayability of the game. Some groups are more cautious and less inclined to take risks, and others are happier to live on the edge and risk that extra outbreak to focus on sharing their city cards with another player.

The main reason why Pandemic is ‘replayable’ is because the random infection and player card decks. This results in the diseases spreading differently across the board each time you play. This offers a different challenge each time.

As with most games there are expansions for Pandemic: In the Lab, On the Brink, and State of Emergency. Each can be added to the game to vary the game-play in a unique way. I can’t comment on the expansions as I haven’t got round to checking them out yet.

Is it good value for money?

Yes! Pandemic can be picked up for around £25-£30, which is a great price for such an iconic co-operative game. I love that I have a reliable gateway game on my shelf that showcases board games in a completely different way to non-gamers who have never heard of co-operative board games before. Pandemic is a solid game that is well worth the reasonable pricetag.