It’s almost that most wonderful, merry time of year: only a few sleeps to go until CHRISTMAS! I’ve been very good this year, so I’m hoping Santa will bring me a few board games from my ever growing tabletop wish list! Below are some of my top picks – I’ve tried to whittle the list down where there’s something for everyone, so maybe it’ll help give some last minute gift inspiration!I give to you, the 100% official Mattimus Primed Christmas List 2017:

The new one: Dice Forge

Dice Forge is all about using (you guessed it) dice to gain resources and complete heroic deeds to claim victory and win the gods’ favour. Throughout the game your dice can be customised by swapping the faces to increase your chances of gaining resources you so desperately need to win.

I love the creative and innovative ‘dice-crafting’ mechanic that is at the heart of Dice Forge. I’ve not played a game like it before, so I’m itching to get this one on the table and give it a go! 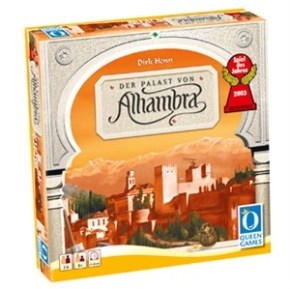 The Classic One: Alhambra

When I first started getting into tabletop games I watched a lot of Wil Wheaton’s Tabletop. In one of the very first episodes I saw, Wil and friends competed to build the biggest and best Alhambra. I’ve wanted to try it out ever since.

Alhambra is a set collection and tile placement game where players are master builders who want to purchase new buildings from world renowned specialists such as stonemasons and horticulturalists. These buildings are purchased and added to a players Alhambra to make them worth more points. It is important that the specialists are paid in their native currency, this where the set collection comes into the game.

I love games where you are creating something, so building my own Alhambra is right up my street!

The One for Two: Jaipur

As most of my day-to-day gaming is me and my wife, it’s great when you come across games that play well with two players – thankfully, there are a lot of games out there that are specifically designed for two. Jaipur is one of these games. Both of you are very successful merchants directly competing to be the best trader, seller, and keeper of camels!

The theme may sound a little dry, but the gameplay is brilliant and really captures your attention. The quick back and forth between turns leaves very little down time, so it’s easy to get caught up in the momentum of the game. I’ve sought out Jaipur at gaming events and board game cafes more than once, and it’s about time I added it to my collection. 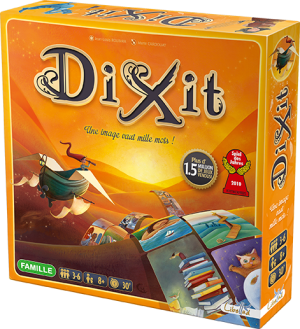 The One for the Family: Dixit

The second Libeludd game on my list, Dixit seems like a brilliant game to crack out on Christmas Day. Dixit is played with cards that are completely coved with art (similar to those in Mysterium or When I Dream).

I think Dixit will have great re-playability, as each player will interpret the games fantastic artwork in numerous different ways. Fingers crossed it’s waiting under my tree on Christmas day, so we can crack it out with the family after dinner.

The One for Groups (6 players): Colt Express

I have a shortage of games for 6 players and up, so would really like more ‘big group’ games on my shelf. Colt Express fits the bill (albeit only just, as it plays with a maximum of 6).

Good design and visuals are an important part of an immersive game, and the first thing that attracts you to a new game on the shelf. I’m drawn in by interesting themes, box art, character design and, now I’ve seen Colt Express, awesome 3D Trains! The 3D train makes up the play surface and players move through the carriages and over the roof to steal the most riches. I’m excited to try it out. 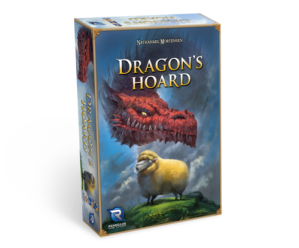 The Small One: Dragon’s Hoard

Who doesn’t love Dragon’s? Add the fact that the players actually get to play the dragons and steal multi-coloured sheep from farmers fields to trade for dazzling treasures… I’m totally invested.

Dragon’s Hoard sounds slightly ridiculous and full of light-hearted fun. I also really like the snippets of artwork that I’ve seen from the game. It reminds me of Yoko Nachigami’s artwork in Fairy Tale, another card game with cool looking dragons and excellent artwork!

The One that Expands Another…One: Carcassonne Inns and Cathedrals

I’m not really that big on the whole expansion thing, but to be fair I haven’t really explored it. Up until now, I have chosen to buy completely new games rather than invest in expansions – easy to do when there are so many new games out there to try! However, I’m now coming around to exploring expansions that will improve the playability of my favourite games; I feel that Carcassonne Inns and Cathedrals (or full title Carcassone: Expansion 1 – Inns and Cathedrals) is one such expansion.

Not only does it add two new buildings (the Inns and Cathedrals, which increase the score of Roads and Cities respectively), but it also adds an additional 6th player. To be honest, it’s mainly the additional player that sells this expansion to me, as it would mean we could play Carcassonne with more couples or family (we have big families!).

So now I pass it over to you. What do you think of my list? What games are you hoping to find wrapped up under your tree this year? I hope Santa bring you everything you’ve asked for!

There was an error retrieving images from Instagram. An attempt will be remade in a few minutes.